Not many people know that one of the original “big production” DWS movies was filmed in Croatia. The movie features Chris Sharma – one of the guys that originated the DWS hype, Steve McLure – British strong man and 12 other strong boys and girls. Surprisingly, it somehow also features Jack Osborne, sun of Ozzie Osborne. And yes, he is climbing in the movie as well.

The crew is climbing and having fun on the cliffs of Kornati islands, some 2 hours boat ride from Hvar. Kornati are a national park and approach is regulated. Also, Kornati has some of the best DWS cliffs in the Adriatic, if not Europe.

After a few scenes of a climber running around naked, flashing cars on Croatian roads at night, the crew first climb on a perfect overhanging crag on Kornati. All routes are first ascents on untouched rock, with a perfectly looking “Just One Kornati” 7B being the highlight of the first day. 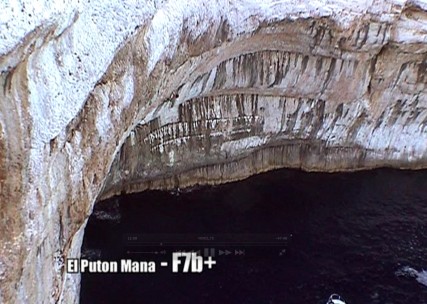 On day 2, they visit a 24m cave, looking for the ultimate line. The cave easily matches Malorca’s popular places. We have a chance to see routes such as the El Puton Mana 7b+ through the roof of the cave, The Shrubbery 7c+, The Fierce Wabbit! 8b, Knights that say Ni! 8a, European Swallow 7c+,  The bat hang 8a+. Obviously, British climbers enjoyed British humour in naming these lines. 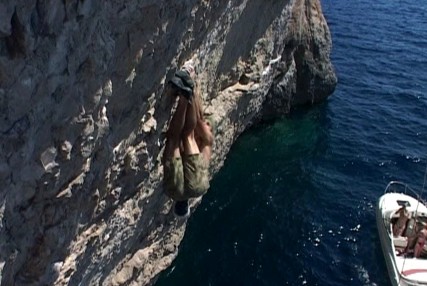 Chris climbs a huge Smooth and Steep 7b+. Going back for supplies, they also pick up Jack Osbourne in top form. They establish a new crag, a beautiful looking overhang near by and the tick list picks up pace. Jack Osborne tops out of a 5b “A Whole lola love” and sets the bar high without breaking a sweat.

Next day, the focus is on a crack-slab route called. Crouching Tuna Hidden JellyFish 8b+, on just perfect rock and up come The Ring of Fire 8b+. Routes are freed and are now waiting for repeats.

The movie was filmed in 2006. and is a bit rough around the edges for today’s standards of climbing movies. Still, it is there to show the great potential of Dalmatian rock for DWS. But not on Kornati though. Chris and the crew have been the last climbers to climb there legally. National Park authorities have forbidden climbing to conserve bird nests.